Middle schoolers are ridiculous. They just are. And awesome. Especially awesome. The words that come from their mouths with boldness and confidence are sometimes absolutely absurd and can come at the most inappropriate times. It’s fantastic! Their questions, comments and confident remarks are a result of their attempts to experiment with humor and assert their perceived maturity.

I work with middle schoolers for my job and spend hours a week talking and texting with them. And so I laugh. A lot. If you’ve been a friend of mine for more than five minutes, you’ve probably heard one or two stories recounting something that was said that was so funny that it had to be shared. 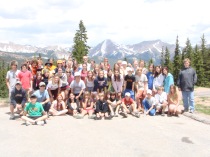 You can’t make up the kind of stuff that they say. Not even the most creative person in the world could accurately predict the sporadic mind of a middle school student. If I scripted such a conversation with one of my adolescent friends, it would not nearly be as hilarious or awkward. It just wouldn’t. They are too unpredictable, too awkward and too bold with these seriously ridiculous statements. You just can’t make up stuff like this. You just can’t.

Early this morning, as I was sipping my coffee and sitting on my couch all by myself, I started laughing. Out loud. All alone. I was reading something in the book of Joshua, the part of the Bible that records the stories of the Israelites when Joshua was their leader. There are a lot of reminders of what God had done with and taught these people through Moses before this time,  more than a few epic battle scenes and a the unfolding of returning to the Promised Land that God had set aside from them centuries before then through Abraham. It was there that I read a story my eyes had seen and on which I’ve heard preached dozens and dozens of times.

At this point in the story, we meet the Israelites as they are hanging out in Gilgal and are about to go to battle with Jericho. It’s there where God gives Joshua the battle plan.

-my paraphrase of Joshua 6

I’ve never been in the military and haven’t even played a good game of Capture the Flag in over a decade (yeah, and I’m a youth worker!), but, if you were to ask me, this plan sounds seriously ridiculous. I wonder how I would have reacted to Joshua. Would I have questioned his sanity? his authority? his logic? Why would someone ever assume that marching in circles and yelling really loudly would destroy the walls? That doesn’t make sense. It just doesn’t.

But it works. Against all logic. It works. Israelites win. End scene.

I wonder why what it was like to live in that moment. That incredible moment in history when the miracles God did through Moses were only one generation ago and he still continued to part seas and win epic battles with seriously ridiculous military tactics? More so, I wonder why I don’t get to see these things today. Biblical scholars could discuss for millions of hours how God works in our lives now compared to then, including references to the spirit of the Lord, Jesus’ presence on earth and the Holy Spirit dwelling in us because it’s all pretty incredible when you stop to think about it. And among all the different theories, ideas and conclusions, there would be one thing that they couldn’t explain: God’s creativity.

God created creativity. If you’ve ever met a creative person – not merely a normal creative person, but someone who is extraordinarily creative – aren’t the ideas and concepts they present a little ridiculous? You can’t predict or define what they might come up with or say next. You just can’t. And that’s what makes it so fun to be around them!

What if we, those of us who believe in this same great big God who came up with such a seriously ridiculous battle plan that worked, still expected that same God to work in ways that we might not expect? What kind of faith might we have if we approached every unknown, every challenge, ever question, every situation, every wonder, every predicament, everyday with eyes wide open and palms up, not merely hoping or praying but rather fully anticipating God to act and speak in ways that will blow our minds? What kind of stories might we tell? You wouldn’t be able to make up stuff like that.

Looking for something specific?