I laugh a lot. Not just a lot by normal standards. but a lot by standards for a lot of laughing. I love to laugh! Who doesn’t?

Working with middle schoolers and high school students, it’s hard not to laugh. They say some of the most absolutely absurd things on the planet with more confidence and certainty than one would proclaim about the existence of gravity. Their insecure beings have a way of taking ideas and opinions and turning them into absolute fact. And most of the time, I have the privilege of enjoying such statements and asking them questions in response that unintentionally fish for and produce even more ridiculousness. My favorite are typically their ideas on my dating life, or lack thereof. On that particular topic, they often claim to be experts.

This week was no different. We had our first middle school Bible study of the school year, and even though the evening’s winning comment was not about said dating life, or lack thereof (although, they did inform me that they found me a husband: some dude who works at an outdoor gear store who they thought was cute), it provided too much entertainment to keep to myself and an actual more thought-provoking concept that, clearly, became blog-worthy. 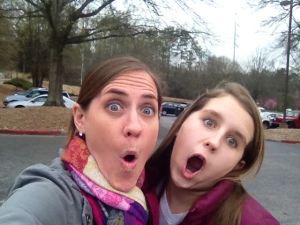 8th-Grade Girl: “6th graders are so annoying. They think they’re ‘all that’.”

And she meant it.

There was no room in this girl’s reality that she was not “all that” in 6th grade, worthy of such an opinion. She was that cool, that awesome, that unique. Now, I am not doubting this girl’s amazingness. I’m a big fan of her. She is an incredible young woman who is special and wonderful and should be confident. But what made me stop and think, connecting it to a not-so-hilarios conversation had recently with a peer, is that there is no way that this girl could have seen herself as having an issue of overconfidence, which is from what current 6th graders, from her mature and wise 8th-grade perspective, suffer.

We are not all unlike this 8th-grade girl in our sometimes flawed perspective of how we see ourselves vs. how we look at other people, especially when conflict is involved. The not-so-hilarious conversation with a peer was the inevitable result of a rough encounter. Words were said, and, unintentionally, feelings were hurt. It happens. We’re sinful people who do sinful things that add up to the messiness of life. And this particular relationship had become just that: messy. There was no misguided intent behind the interaction, no desire to hurt the other person and no expectation that it produced pain. But it did.

Upon preparing for a challenging but necessary conversation with the hopes of reconciliation, deliberate words were chosen. Many words would be necessarily shared, but others would be wiser left unsaid, unmentioned and undiscussed. It was hard to crawl into the mind and thoughts of this other person. I would like to say that I would have handled the situation differently because then we wouldn’t have had the conflict in the first place…but would I have? Am I any better than or above not being “all that” in any other similar situation?

I’d like to think that my perspective is more mature than that of an 8th-grade girl who thinks that 6th graders have an attitude problem, but unless I’m willing to open up my mind to the possibility that, oh yeah, I could be like that, too, then I’m really not. And I’m probably like that more than I’d prefer to admit. It’s easier to think that we might not make the same mistake. It’s easier to think that we might sin but not in that way. It’s easier to believe that we’d be different. But such thoughts, which I confess were only corrected in my head because of a reminder from a good friend, would have been destructive. I doubt that the challenging conversation would have produced the same grace-filled results on either end if one of us hadn’t had the mindset of considering the other person’s perspective. But it did, and for that, I’m grateful.

People have all kinds of different reactions when I tell them that I work with teenagers in the youth ministry context. To some, it’s strange and unfamiliar territory. It’s not a normal job and gets not-so-normal reactions outside the church bubble. To some, I’m crazy. Certifiably insane. To some, it’s a pretty cool gig and perceived as just “hanging out” all the time. But to me, it’s just what I do. Who knows if I’ll do it forever, but for today, it’s what I do. And that’s enough. I love that the absurd and ridiculous things that come out of their mouths are sometimes more true about me and other adults than I’d like to admit. Jumbled in with the large portion of insecurity and self-doubt is often an overconfident, opinionated bullhorn, willing to broadcast anything. And in between all the awkwardness of this life stage is some good truth.

Looking for something specific?